There are a lot of various air purifiers present on the US market today, but the absolute majority of them are useless in 1200 square feet rooms. This is mainly due to 2 reasons:

Low CADR rating. CADR stands for “Clean Air Delivery Rate” measured in CFM (cubic feet per minute) and this is the most basic metric that anyone should look at first before buying an air purifier. It means how much of the air has been cleaned of certain airborne pollutants. They are known as Particulate Matter and are displayed as PM2.5. HEPA air filters can capture these particles.

Small and underperforming air filters. Often manufacturers exaggerate the real CADR rating and instead put the airflow number in specs. Let me provide you with an example: the fan in an air purifier can circulate 500 cubic feet per minute of air. Sounds good, right? However, the air filter can filter out just 50% of all particles that pass out through it. As a result, the real CADR rating is two times less than specified and stands at around 250 CFM. This leads to the effective room coverage being half as much as advertised and air cleaning capabilities effectively halved.

To avoid the aforementioned situation it’s worth looking at powerful and trusted air purifiers, that are capable of delivering clean air in spaces of 1200 sq. ft. To make it easier for you to decide which one to get, I made the list of best air purifiers for a 1200 square feet room, home, basement, office and other spaces. 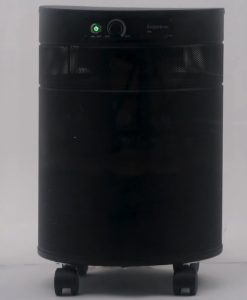 This Airpura air purifier employs 5 stage air cleaning process with 3 filters, UV-C lamp and the Titan Clean reflector. Let’s take a more comprehensive look at each step in this process.

Initially, the air gets inside through a pre-filter. This filter has 2 functions: it captures large particles of dust, hair, dander, etc. It also protects the more important filters from getting dirty too fast.

After the initial stage of cleaning, the air is sucked to the next filter which is filled with activated carbon. This is nothing extraordinary as carbon filters are used for a long time now for a reason: they are good absorbers of odors.

The key here is the size of the carbon filter and its thickness. It’s not enough to just have “some” activated carbon inside a filter – the more of it present there, the faster odor gets absorbed and more of it will be absorbed in the end.

The Airpura P700 air purifier has no problems with activated carbon: it employs a large, 18-pound carbon filter to capture smells (including acrylic fumes), VOCs and gases. After 15 minutes 1,200 sq. ft. space will be free from any kinds of smell, including tobacco smoke.

To remove remaining particles down to 0.3 micron in size, the P700 uses a high-quality HEPA air filter. This filter removes 99.97% of allergens, irritants and airborne pollutants from the air.

In addition to this, the Airpura P700 employs a combination of UV-C light and TitanClean Reflector. The latter is coated with titanium dioxide which triggers a reaction after germicidal light illuminates, turning gases and fumes into harmless carbon dioxide and water.

The air purifier features the filter change indicator that will let you know when to change any filter. The main HEPA filter won’t require a replacement for at least 3 years, the Carbon filter can work up to 2 years and the pre-filter lifespan is around 12 months.

At the lowest speed, the Airpura P700 produces just 30 decibels of sound which equals a whisper. At the maximum speed, the air purifier makes a noise of about 63 decibels. This is the sound level of a normal conversation.

Overall, the Airpura P700 is an extremely quiet, efficient air purifier that is worth every penny. It can be placed in an office, schoolroom, living room, cigar lounge and any other 1200 square feet space to clean air from pollutants, bacteria, odors, and allergens.

It also can be easily moved from room to room thanks to built-in casters.

Airganics 700 is a more compact air purifier when compared to the Airpura P700. It has a slightly higher CADR rating which results in faster air cleaning in 1200 sq. ft. rooms, but the difference is negligible.

The Airganics 700 also features a pre-filter and carbon filter. The third layer of air filtration is customizable: the manufacturer offers to install either a 4-pound HEPA filter (cheaper, lasts for 3 months only) or 6 pound Carbon Fusion filter (higher price tag, longer lifespan).

The carbon filter in the Airganics 700 pales in comparison to the Airpura’s: 4 pounds vs 18! However, that is still considered a “large” filter that is capable of trapping household odors. In a combination with 700 CFM airflow, it provides great air cleaning from odors and smells.

The Airganics 700 is ready to operate right from the box, it doesn’t require any additional assembly. 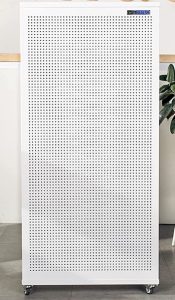 Previously reviewed air purifiers are better when it comes to removing odors from the air. In return, the Smart Health Blast removes VOCs, gases and chemicals at a much quicker and larger scale. In long run, it adds fewer maintenance costs: the HEPA filter is designed to work for at least 22 months if heavily used 24/7.

The Carbon filter is also designed to work longer than the usual filter: it has an expected lifespan of 18 months.

The Smart Health Blast is also extremely quiet, despite its high CADR rating of 1360 CFM. Overall, it

In the end, Airpura P700 is simply the best air purifier. 1200 square feet home, office or a room – every kind of space will be thoroughly cleaned by this extremely powerful, but quiet air purifier.

Airganics 700 is also a great pick, and the replacement filters are comparatively cheap. Get the one if you are tight on money.