Best Air Purifier With Ionizer in 2022

Sometimes the air indoors is too polluted and an ordinary HEPA air purifier needs a bit of help to remove airborne pollutants. That’s where a built-in ionizer comes to help.

What is an ionizer? Here is an article you should read to make yourself more familiar with this type of device. In short, this is a filterless air purifier that uses ions to remove harmful bacteria and other irritants from the air. It usually releases a small amount of ozone as a byproduct, which in return also freshens the air.

When an air purifier comes with a built-in ionizer it kills two birds with one stone: air filters trap particles of dust, pollen and other fine particulates whereas the ionizer removes smoke, bacteria and germs from the air. This combination leads to better results overall.

Ionizers used in such air purifiers also can be turned off in case you’re worried about the release of ozone.

Now let’s take a look at the best portable air purifiers with the ionizer in 2022.

Coway Airmega AP-1512HH Mighty air purifier is a popular portable, powerful and reliable air cleaner made by the Korean company called Coway. Millions of people worldwide use it to clean the air in their houses, mostly in small rooms and bathrooms.

The popularity of this air purifier with ionizer is based on a few factors:

I recommend checking my review where I go into more details about this air cleaning device if you want to know more. But I can assure you that the Coway Airmega AP-1512HH is worth every cent and is one of the best air purifiers that is available today for purchase. 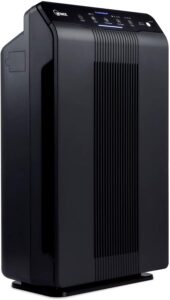 Winix PlasmaWave 5500-2 is another powerful and popular air purifier I can recommend for anyone. It uses the same 4-stage air cleaning system used by the Coway Airmega I discussed above and it does miracles in removing allergens and smells, particularly in a bathroom or any medium-sized room.

This air purifier was developed by another Korean company called Winix. It has been making a wide array of home appliances for several decades and these guys know how to combine a fan, 3 filters and an ionizer into a powerful air cleaning machine that efficiently removes allergens, bacteria and smells – including cigarette smoke which is often hard to get rid of.

When it comes to features, they are identical to the Coway’s and include 2 modes (Auto/Sleep) and the timer. The Auto mode is slightly better, as it uses 2 sensors instead of one.

The Winix PlasmaWave 5500-2 is also one of those rare air purifiers that have a washable filter. The Carbon filter can be washed and reused many times before it will need a replacement.

Alen BreatheSmart 75i is a more powerful air purifier, that uses a combination of large air filters with an ionizer to remove airborne particles. Compared to the previously mentioned Coway and Winix, this one is for use in large rooms, up to 1200 – 1300 sq. ft. in size.

This air purifier uses a pre-filter, true HEPA filter and ionizer. However, the Alen company allows a customer to select the HEPA filter they need the most before buying the unit. There are 4 filters available for installation: Pure, Fresh, Pet and Heavy Odor. All of them target allergens, dust, mold and germs while others also show great results in removing particulate smells and chemicals. For example:

So based on whether you have pets or do not, do you need the removal of heavy smells or not, you can choose the filter you need and don’t overpay – the difference between the cheapest and the most expensive one is just $30.

Another great feature is low sound. Even at the highest speed, this air purifier remains relatively quiet at 49 dB. It can be run at home 24/7 and does not disturb anybody from watching TV, studying or relaxing. In the Sleep mode the machine produces white noise and won’t disturb you at night.

Overall, the Alen BreatheSmart 75i is the best air purifier with ionizer for large rooms, offices and big open spaces.

Medify MA-40 designed by the Medify company is the best air purifier that does a great job at removing allergens and helping people to get rid of allergy symptoms like coughing, sneezing, stuffy nose and swollen eyes caused by pollen and other tiny allergen particles.

But what makes the MA-40 so special? The answer is simple: a combination of price, high-quality HEPA filter and high CADR rating.

The price for this air purifier is below $350 and sometimes gets as low as $260 – 270. Compare this to the $900 – 1200 you have to pay for an IQAir unit which is considered by many as the best for allergen removal and you get the picture.

The HEPA filter removes air pollutants at a 99.9% efficiency down to 0.1 micron. Many virus particles are 0.3 – 0.1 micron in size and this air purifier can catch them.

The powerful fan generates a good airflow that results in a good Clean Air Delivery Rate of 224 CFM (cubic feet per minute). In a 350 sq. ft. room the unit delivers 4.8 air changes per hour which is a standard if the removal of allergens is a major concern for getting an air cleaner. In 840 sq. ft. space the air is cleaned twice an hour.

However, the downsides are also here: the HEPA filter requires a replacement every 4 months while the noise produced by the machine high, peaking at 66 decibels which can be compared to a standard office sounds. However, the affordable price and allergy relief provided by the Medify MA-40 outrank these cons and make it the best air purifier with ionizer for many people in our country.

However, for unknown reasons it’s often hard to find a replacement for the UV-C bulb. It lasts for only one year, is not available on Amazon and often is out of stock at the official site. So if you’re going to get this air purifier for yourself – and it’s worth the cost that’s for sure – make sure you get yourself at least 2-3 additional bulbs, so the air purifier will work at least 3-4 years before running out of replacement parts.

In addition, this air purifier can also work as an essential oil diffuser. Just buy yourself an oil and pour it onto the tray to have a pleasant scent around your room.