Levoit Core 600S is the newest release among Levoit air purifiers. It offers air cleaning for large rooms up to 635 square feet with many smart functions.

What are these smart functions, how does Levoit Core 600S perform, pros and cons and many more I cover in this in-depth Core 600S air purifier review.

What’s in the Box

Core 600S comes plug-in-ready, meaning you don’t have to assemble it or anything like that. Just plug it in, push the power button and let it do its job. HEPA air filter is already installed inside the air cleaning unit.

I’d say that Levoit engineers did a pretty decent job at keeping the air purifier powerful (about that later) yet lightweight when it comes to power/weight ratio. It’s fairly small at only 23.6 inches in height and 12.3″ in length & width.

The ajority of the space inside takes a 2-pound 3-stage air filter that includes:

Levoit Core 600s is packed with features. Just look at that:

Auto Mode: based on AirSight Plus sensor data adjusts the speed automatically according to the number of particles present in the air.

Sleep Mode: in this mode, the Core 600S goes to the slowest speed (lower than “Low”, not available in manual mode) and turns the display off (the filter indicator is still on though). Running the air purifier in a bedroom isn’t a problem at all as it’s very quiet (lower than 26 decibels) and doesn’t produce any sound.

Alternatively, it’s possible to turn Light Detection via the VeSync app. If this setting is on, the display shuts off if the room goes dark and Core 600S won’t go into speeds higher than Medium in Auto mode, no matter the air quality. I’d say this is an alternative to the Sleep mode if you prefer having quiet regular white noise inside your room to help you drop asleep.

QuietKEAP technology is responsible for keeping the noise down. The Core 600S is probably the quietest air purifier out there: at low speed, it makes inaudible noise (~26db) and at the highest speed only 55 decibels that equal to the sound of a quiet neighborhood or ordinary conversation. Considering the Core 600S employs a powerful fan and high CADR ratings I’d say this is quite an achievement in itself.

5 speeds: 4 available in manual mode: Low, Medium, High and Turbo. The quietest speed is available only in Sleep mode.

Display locking allows blocking all buttons on the air purifiers, working as a child and pet lock.

Levoit managed to stay out of today’s unfortunate trend when the air purifier has only a power on/off button and a button to switch speed physically present on the unit whereas everything else is controlled via an app. Sometimes apps are buggy, sometimes WiFi doesn’t work, you name it. It’s always good to have real physical buttons present on the air purifier to have the ability to change settings at any time and don’t be dependent on an application only.

At the top of the Levoit Core 600S located several buttons: 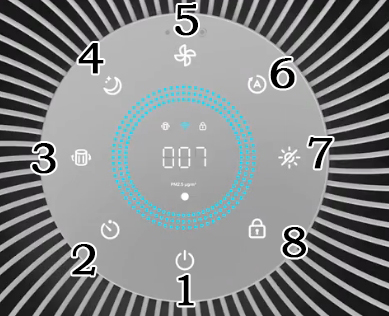 In other words, if the app doesn’t have access to the Core 600S you still have full control over the air purifier and its functions.

The three rings of dots you see in the picture above are responsible for the air quality: Blue stands for Very Good air quality, Green means Good, Orange = Moderate and Red = Bad. Numbers represent the number of particulate matter equal to or smaller than 2.5 microns (a.k.a. PM2.5) present in the air inside a room.

On the top of Core 600S also located:

Levoit Core 600S uses the standard VeSync app (Android/Google) to control the air purifier. Registration is needed for the app to work properly. I don’t see a reason to describe the step-by-step registration process as it’s straightforward as it can be.

App offers additional control over the Core 600S, most notably it allows to turn on light detection. 90% of all functions are available via the physical control panel on the top of the unit.

What I really like about the Levoit Core 600S is its high CADR rating. This machine is really powerful considering the price!

Levoit put the number “635” as recommended room coverage and the Core 600S is really capable of filtering out pollutants in such area. Take a look at the table below:

The air purifier can be used in larger rooms too, yet it’s less effective the larger the space. If you are in dire need of a household air purifier for extra-large rooms more than 1000 square feet you should take a look at Blueair air purifiers (series Pro, models XL or L) or Tracs air purifiers (TM500, TM950 or Industrial). But they are priced way over the Core 600S. For the price, this Levoit-made air purifier offers excellent room coverage.

Replacement Filters: ~$59 for a replacement of the 3-in-1 filter (model LRF-C601-WUS) every 6 months (check availability).

Electricity Costs: ~$2,5 per month if used 12 hours per day at a maximum speed (check electricity usage in your area). In reality, it will be lower as at the lowest speed the Core 600S consumes very few watts of power per hour.

The Good
The Bad

The major difference between the Core 600s and 400s is effective space coverage. See the table below for more differences between them.

Levoit Core 600S is more powerful when compared to the Core 400S. It features increased CADR ratings and larger filter for better and faster air filtration. It totally worth the price difference if you have a room over 400 square feet.

The major difference between the Core 600s and 300s is effective space coverage. See the table below for more differences.

Levoit Core 600S is a beast compared to the Core 300S. It has 3 timer higher CADR and more power, making it great air cleaner for large spaces. On the downside, it produces more noise and consumes more electricity but it is to be expected anyway.

The air purifier is completely ozone-free.

Can I wash the filter?

No, you can’t wash the Core 600S filter. It will break apart its ability to filter out particles.

How often should I change the filter on the Core 600S?

The indicator will let you know when to replace the filter. On average you should replace it every 6 months.

Wrapping Up the Review

The Levoit Core 600S is worth investing $300, that’s for sure. It offers large room coverage with 4.8 air changes per minute in 635 sq. ft. rooms at a maximum speed, has all the necessary filters to clean different kinds of pollutants and comes with several smart features that make sense and aren’t some useless fancy stuff.

The price and features make the Levoit Core 600S stand out among many competitors and I’m pretty sure it’s going to be one of the most popular portable air purifiers in 2022 and in years to come. 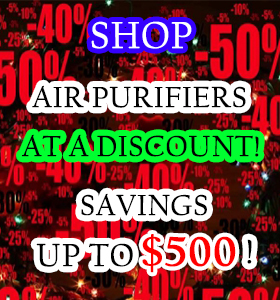